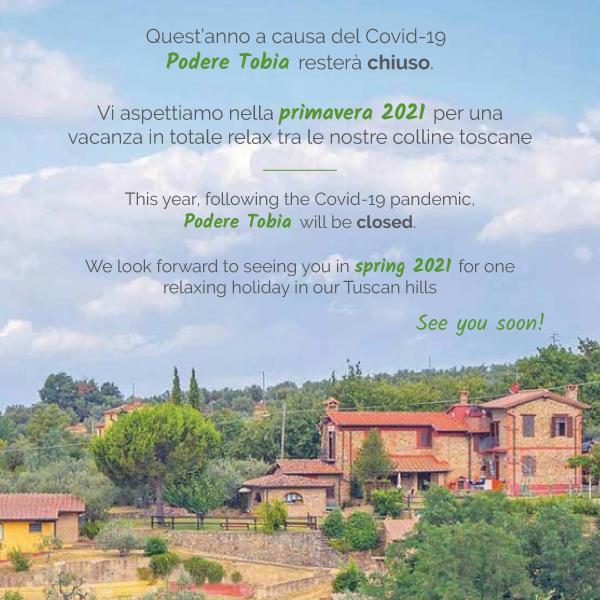 Podere Tobia is situated circa 300 meters above sea level in the middle of the Tuscan hills on the slopes of Montalbano in Faltognano di Vinci.

Here are some tips what to visit nearby:

You can find restaurants, shops, supermarkets, public services and markets.

One of the principal art treasuries in Leonardo da Vinci’s place of birth. His house of birth is situated only 3km from Podere Tobia.

City rich of Renaissance art and architecture. The bell tower of the Cathedral designed by Giotto is one of the main attractions.

Many medieval sights. “Piazza del Campo” is the shell-shaped principal public space of its historic center.

In addition to the leaning tower built in 1372, also the “Campo Santo”, Pisa’s old cemetery and the Pisa Baptistery are worth to be seen.

It is a small village with bars, shops and grocery stores and is situated 186 meters above sea level. Less than 300 families live there.

Town with restaurants, shops, supermarkets, public services and markets. This is one of Vinci’s most populated fractions.

It is a small medieval town in the lower Valdarno plain with rail connection and highway.

Famous for being the poet’s G. Boccaccio’s place of birth and death with numerous historical and artistic buildings.

The center of the municipality stands atop of a hill between Florence and Pisa. It is famous for its white truffles, wine and oil products.

The medieval architecture of the historic city center is UNESCO World Heritage.

Port city famous for its fish specialties. The fraction Venezia Nuova (“New Venice”) is worth to be visited.